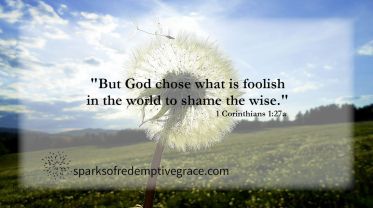 I was taken aback at the question my friend had just posed. And, in truth, I was embarrassed that I had never thought of it myself. Well, never, might be too severe. But I hadn’t asked it in decades. “What do you think God’s purpose is for Douglas’ life?”

“Whatever His purpose was, surely it has been sabotaged by mental illness,” I thought silently. “Surely God moved on to ‘Plan B’ a long time ago,” I reasoned in my heart.

Soon after that conversation, when Douglas was in the middle of a severe manic episode, a few church friends gathered in our home to pray peace for him and wisdom for us. The pastor started the evening with a meditation that, like the question from my friend, jolted my worldview. “Let’s ask God to show us how He sees Douglas.” We bowed our heads and each quietly listened. Then everyone wrote a note of what they believed God had said.

There I sat, dumbstruck, ashamed that my own foolishness had led me to think the great creator-God might have no purpose for Douglas. I realized my weak faith had not believed that He could make my son strong. In my own meager wisdom I had closed my eyes from seeing His transformational love poured out upon this one who often appeared foolish and weak. And it began to occur to me that, God has always stayed on “Plan A.” His purpose for Douglas, now and always, is to show off the gentle power of His redemptive grace.