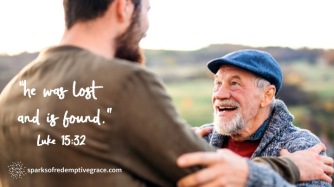 When Douglas took off after high school to attempt life as an adult, he carried with him  his “fortune”: savings bonds from grandpa, a car given by a friend, graduation monies and a promise of rent payment from us. Within months it was all gone. Squandered. Like the Prodigal Son, he had taken all the things that could have given him a successful launch and used them on “riotous living.” It’s no wonder that in those early days I often turned to the parable in Luke 15:11-32.

But that was before. Before a diagnosis. Before understanding of mental illness. Before the discernment to distinguish misdirected brain chemistry from willful foolish behavior.

When he returned to us (and particularly after he submitted to treatment and became stable), I reveled in the thought that my son had been “dead and is alive again; he was lost and is found.” The rejoicing continues.

As does the bitterness of the other brother. Why would we put so much focus on the one who caused so much pain? Why didn’t we celebrate the one who was always with us, obedient and good? The questions are real and legitimate. But I have no answers.

The story of the Prodigal Son isn’t about a person living with mental illness. For those of us who love adult children dealing with mental health issues, it is important we realize this. Yes, their behavior may include wild spending, sexual impropriety, homelessness, lying and addictions. Their attitudes may well take the form of rebelliousness, rejection or anger. But we must never ascribe the cause to moral failure. Such behaviors are prompted by a broken brain.

When my disciplined, kind father developed Alzheimer’s, his behavior changed remarkably. But we all knew it was from the disease. We never ascribed it to his volitional will. We’d lived around him for decades and knew who he REALLY was. We were able to overlook the actions and zero in on getting treatment for the illness.

Like Alzheimer’s, mental illnesses are brain disorders. The problem is, when onset happens in late teens or early 20s (the most common ages for diagnosis), we haven’t yet experienced our children as “normal” adults. We don’t know what they are really like. Unlike with my dad, where we knew his Alzheimer’s behaviors were abnormal for him, with Douglas, we didn’t.

However, with treatment (including medication, therapy, family and peer support) over the last 10 years we have discovered who Douglas really is: disciplined, kind, generous, helpful, easygoing … delightful.

Douglas was never a prodigal, though gladly welcomed home when broken and lost.  Instead, his parable is the one about the good Samaritan. Douglas was the one beaten up by robbers and left for dead on the side of the road. He was the injured one who was carried to help and got better (Luke 10:25-37). And he’s the one to whom someone extended mercy.

May God ever expand our understanding of what our loved ones live with every day. May He give us greater grace to walk beside them with generous care and wise support.

Found this blog helpful? Subscribe to receive future posts by email. Click here.
Be sure to order the Sparks of Redemptive Grace book and prayer guide, too! Click here.