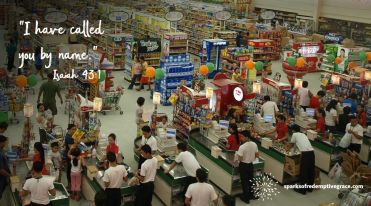 My curious eyes followed him around the store. He was easy to track in his seersucker shorts, almost-tucked-in long-sleeve plaid flannel shirt and unmatched socks sliding into well-worn sandals. As he walked/skipped/danced unfettered up and down the aisles, he talked quietly to himself.

I also watched the other people watching him. Children starred. Adults glanced suspiciously and then quickly looked away, swiftly moving their grocery carts to put some distance between themselves and him. He was odd and he was a little scary. But he wasn’t really doing anything to cause harm. I wondered if his mumbling was simply a rehearsal of his shopping list or just leisurely gibberish. In the end I suspected he was carrying on a conversation with the voices in his head.

He loaded the basket in his hands with a box of sugar-coated cereal, a case of ramen noodles and one lone banana. Somehow he cogently paid for his purchases, adding a pack of cigarettes to the checkout before handing the cashier a plastic card. Then he shuffled to an older silver-colored car and drove away.

I followed Blake* with my tear-filled eyes as he left the parking lot. Yes, I know his name because I know him. He is the son of a friend—a friend who has spent tens of thousands of dollars and countless sleepless nights trying to make things better for her son. It has been more than 30 years since his diagnosis of schizophrenia imprisoned her heart.

The disheveled man in the grocery store, the man chuckling to himself, the man dancing a little, the man buying noodles and cigarettes—that man has a name and a mother and a story. And, though he may not know it, Blake has a God who calls him by name and had written the pages of his life story before Blake ever lived one day of it.

The story has a happy childhood, a college education, a stint in the military and then a broken brain. Across the pages of his life are inscribed a gift for music, an obsession with water, a brother who loves him and a trove of tried-but-failed medications.

As I put my bags of meat, vegetables and sugar-coated cereal into the trunk, I give thanks for the privilege of knowing Blake’s name and Blake’s mom and Blake’s story. I pray to the God who knows, loves and watches over him, asking for His goodness and mercy to follow him around stores, on the road and at his home, all the days, every day, each day of his life.